Super-resolution radial fluctuations (SRRF) is a super-resolution algorithm that analyzes radial and temporal fluorescence intensity fluctuations in an image sequence to generate a super‑resolution image. Broadly speaking, SRRF works because we know that noise is uncorrelated in time whereas fluorophores are. By combining spatial and temporal information from multiple images, SRRF can produce images with resolution approaching ~60 nm. For details on how SRRF works, please refer to our full application note.

The SRRF algorithm, developed by Henriques and colleagues (2016), is a freely available ImageJ plugin that allows anyone to use the technique on any camera. The ImageJ-based GPU-enabled post-processing SRRF algorithm is named NanoJ-SRRF.

NanoJ-SRRF can be downloaded and installed from the latest version of ImageJ or Fiji and can be found here.

Once installed, NanoJ-SRRF can be used to analyze any preexisting image in a format that can be opened in ImageJ.

NanoJ-SRRF can be accessed from the Plugins menu within ImageJ (Fig. 3).

In this menu, you can access the SRRF algorithm to analyze images with the ‘SRRF Analysis’ option, as well as access Advanced Settings (which can also be accessed from SRRF Analysis menu), and the ability to check the NanoJ-SRRF version, updates and website.

To perform analysis, select ‘SRRF Analysis’. This will open options for SRRF analysis, as seen in Fig. 4.

The windows shown in Fig.4 show the options for SRRF analysis and the ability to access the advanced settings. These settings can be optimized depending on the application and the nature of the image. A full explanation of these settings can be found in the manual but some of the more important ones will be discussed here.

To start running SRRF on a dataset, select SRRF Analysis. You will then be prompted to load an image stack to analyze. A good SRRF image will need a stack of ~100 images to produce one SRRF image, but generally the more frames of data the better the final image.

It is important to first realize how SRRF works to understand how changing the analysis parameters will affect the image.

The first thing that needs to be understood is that SRRF works by breaking down each pixel in every frame of the image stack into ‘subpixels’ (Fig. 5).

Each subpixel is then assigned a value related to the probability that it contains a fluorophore. This is done by measuring local radial symmetries in the image (the ‘radiality’).

The radiality is a measurement of intensity gradient convergence: For every subpixel, intensity gradient vectors are measured for a ring of nearby surrounding subpixels. The degree of convergence of these vectors at the original central subpixel is then calculated. For a subpixel located close to the true center of an individual fluorescent molecule, there will be a high degree of convergence and hence a high radiality value. In this way, radiality infers the molecule position. This radiality measurement is performed on every image in the stack to generate a radiality stack (Culley et al. 2018).

The radiality transform gives the spatial information. The temporal information is then needed to generate the final SRRF image which is why it’s important to have a lot of frames of data.

When plotting the radiality value over time, the temporal fluctuation shows whether the subpixel is centered on a fluorophore or not. The degree of temporal correlation tells us with greater precision where the fluorophore is more likely to be in the image.

Once the image stack is loaded in, the SRRF Analysis dialog box will populate with the default settings. It may be worth running the algorithm on default settings first to see the impact on the image before adjusting the parameters.

Some of the key parameters and what they do are outlined below.

Ring radius sets the radius of the ring used to calculate the intensity gradient vectors of nearby surrounding subpixels. It follows that the highest resolution will be obtained with the smallest ring, however, in busy or noisy data a small ring will reduce precision and may introduce patterning. Generally, the lower the density of the data, the smaller the ring radius can be but high-density data may need a larger ring radius for best results. In SRRF the default value is a ring radius of 0.5, the impact of changing the ring radius can be seen in Fig.6.

The radiality is calculated in a ring around a subpixel, the radius of which is determined by the ring radius. The axes in ring determine the number of points around the circumference of this ring that are used in the calculation. The higher the value, the greater the fidelity of the data but at the cost of increased computational time. It’s not recommended to reduce this value below the default, which is 6. The impact of changing the axes can be seen in Fig.7.

The advanced settings dialog box gives more control over the temporal analysis side of the algorithm, the calculation of the radiality transform and weighting.

The remaining advanced settings are all optimizations for different types of images being used which might benefit from certain adjustments.

SRRF is an extremely useful super-resolution algorithm, and making use of it is easier than ever thanks to NanoJ-SRRF and the ability to use SRRF for images taken with back-illuminated sCMOS cameras. 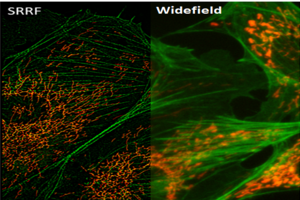 SRRF is a unique super-resolution algorithm that allows for fast live-cell imaging with standard fluorescent labels, when in samples with an ultra-high density of fluorophores. 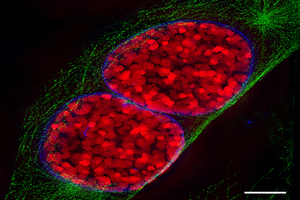